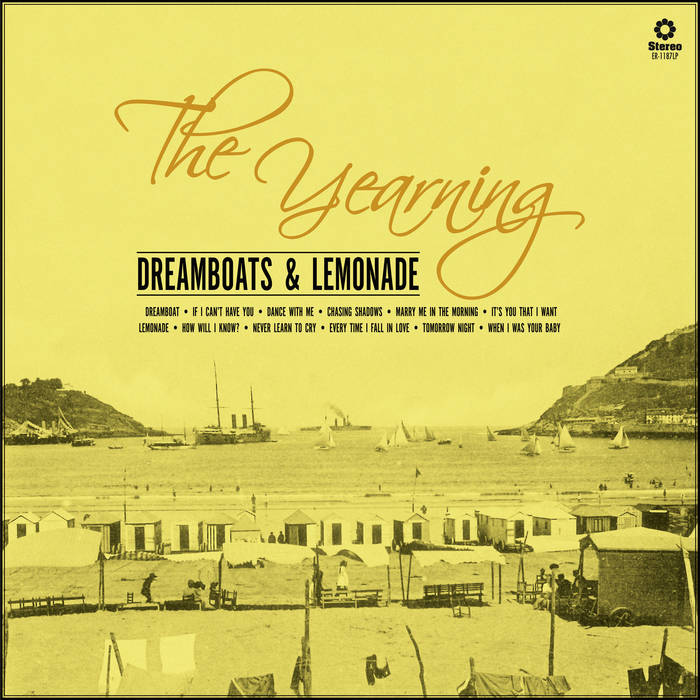 After their previous singles and mini-LP’s, we have been anxiously awaiting the full-length debut from Joe Moore and the rest of THE YEARNING. Their sweet melodies, dreamy arrangements, and passion for the sounds of the fifties, had us so excited, with our hands glued to the needle on the record player, waiting for the right moment to submerge ourselves in the grooves of their first full-length. That moment has finally arrived.

“Dreamboats & Lemonade” plays again with the two sides of love (as their two previous 10”’s did) - the sweeter side and the more bitter side, each represented by the concepts that give the album it’s name and preside over their respective sides of the record. And what better feeling to represent these two facets than the nostalgic melancholy that cradles the small resentments but sugar-coats painful memories. This feeling is the star of this delicious album, which moves between Phil Spector’s wall and Burt Bacharach’s elegance, and doesn’t hide its love for a very specific era and style of understanding pop, decorated with reverb that fades out like Christmas lights.

The album –accompanied by numerous collaborators who make up the THE YEARNING ORCHESTRA, and who share space with wind instruments, strings, electric guitars, and the already known voices of Maddie Dobie (lead vocals) and Alicia Rendle-Woodhouse (backing vocals)– is another emotional journey full of curious and attractive stops. There’s that fun craziness that is “Dance With Me”, the homage to Morricone’s spaghetti-western on the impressive “Marry Me In The Morning” (there is no shortage of horse-galloping sounds), or that delicious version of Françoise Hardy that is “Never Learn To Cry”.

But let’s start at the beginning, with that delicious doo-wop, “Dreamboat”, that opens the album with the boy of your dreams who floats us into unimaginable seas of crystalline water and Hawaiian breezes, with THE VELVELETTES accompanying us on such an incredible journey. The girl groups pop up everywhere, and on “If I Can’t Have You” it’s THE RONETTES and that recognizable drum roll, but also the delicacy and subtlety of CAMERA OBSCURA. “Dance With Me” is a small homage to Sandy Posey, a song full of sweetness and an invitation to dance all night long with the guy of your dreams. The Françoise Hardy thing is no coincidence, because “Chasing Shadows” says goodbye to that unmistakable aroma of chanson, of Mediterranean pop made in sepia tones, without a doubt one of Joe Moore’s best songs. “It’s You That I Want” has the touch of qualité of Henry Mancini and Burt Bacharach thinking about Lesley Gore or Dusty Springfield. “Lemonade” has a vivacious urgency somewhere between the BEACH BOYS at their most Christmas-y and THE SHIRELLES. “How Will I Know?” brings us back to the doo-wop but once again fits in those arrangements somewhere between Bacharach and Brian Wilson, offering us a sunny autumn within its playful arrangements. “Every Time I Fall In Love” makes a special mix of swing, country, and folk, with echoes of the beginnings of rock‘n‘roll, while “Tomorrow Night” shows us again the best of the fifties sound, and lets us imagine that prom in a high school gymnasium decorated in pastel tones. To wrap things up, “When I Was Your Baby” leaves the saddest, most bitter taste, the unavoidable unease you feel when you reach the end of an album that has woken so many feelings in you, that has explained with music what nobody can express in words.

“Dreamboats & Lemonade” is passion for pop, the purest homage to its beginnings, its birth, and all those feelings that fostered its golden years. Joe Moore is a genius and he has written a masterpiece that doesn’t have a single unnecessary second, one of those albums destined to stay with us and act as a sound track to our most unforgettable moments.